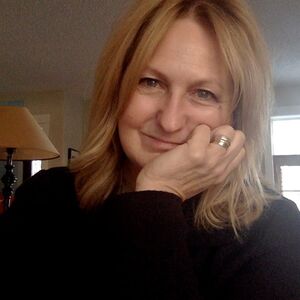 Yvonne DuBourdieu ASA – Visual Artist
Yvonne is a contemporary expressionist painter working mostly in oil, she is interested in the expressive language of colour and line. Through her art practice she deconstructs, rebuilds or reinvents the everyday through photographs, memory and imagination. Many of her paintings are landscape based with a number of them harking back to memories of her Scottish roots or her early impressions of the landscapes that surround her now; prairie fields and rocky-mountains. Yvonne blends marks of impressionism and abstraction to the subjects that populate her works: landscapes, birds, animals and humans. Always interested in the humanness of imperfection and things ‘other’ she continues to explore a sense of place and themes of belonging - often embracing an unexpected world of illusory spaces and imagined realms.

Yvonne was born in Scotland. She grew up in a small village in Stirlingshire and spent most of her young adult life in Glasgow, she moved to Edmonton in 1990. A documentary filmmaker for most of her life she now splits her time behind the camera and in the studio. Her films have aired nationally on television and screened at film festivals across North America. Many of her films have art, artists and disability art as a central subject. Her visual artwork shows regularly in throughout Alberta. Yvonne studied photography at the Glasgow College of Building and Printing, drawing and painting at Glasgow School of Art, and graduated in 2016 from the University of Alberta Extension program in fine art, with distinction. She is an active member of FCA, ASA, EAC, SNAP, CARFAC Alberta and Harcourt House Artist Run Centre where she maintains her studio practice.